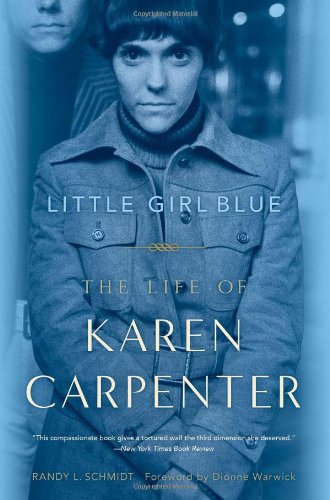 Little Girl Blue is an intimate profile of Karen Carpenter, a girl from a modest Connecticut upbringing who became a Southern California superstar.

Karen was the instantly recognizable lead singer of the Carpenters. The top-selling American musical act of the 1970s, they delivered the love songs that defined a generation. Little Girl Blue reveals Karen’s heartbreaking struggles with her mother, brother, and husband; the intimate disclosures she made to her closest friends; her love for playing drums and her frustrated quest for solo stardom; and the ups and downs of her treatment for anorexia nervosa. After her shocking death at 32 years of age in 1983, she became the proverbial poster child for that disorder; but the other causes of her decline are laid bare for the first time in this moving account.

Little Girl Blue is Karen Carpenter’s definitive biography, based on exclusive interviews with her innermost circle of girlfriends and nearly 100 others, including childhood friends, professional associates, and lovers.